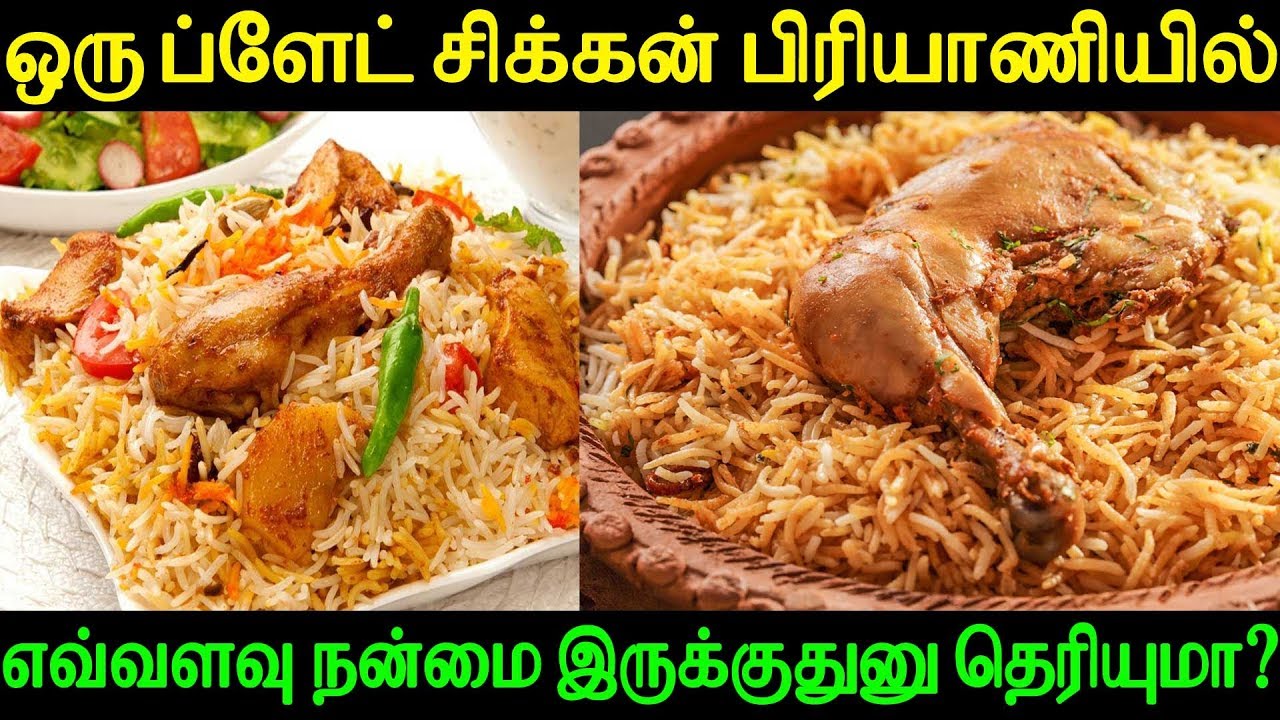 Do you know Benefits of one plate Chicken Biryani ? |ஒரு ப்ளேட் சிக்கன் பிரியாணியில் எவ்வளவு நன்மை இருக்குதுனு தெரியுமா?
Biryani also known as biriyani or biriani, is a South Asian mixed rice dish with its origins among the Muslims of the Indian subcontinent. It is popular throughout the subcontinent and among the diaspora from the region. It is generally made with spices, rice, and meat.
Chicken Biryani is that recipe of delight which when cooked perfectly can turn into a dish par excellence. Loved by all food lovers across the world, it is one of the representative dishes of India that reminds of the culinary heritage of the regal era. Try this delicious biryani recipe.
Ingredients:
• Turmeric - 1/4 teaspoons.
• Salt - to taste.
• Ginger garlic paste - 1 tablespoons.
• Cumin powder - 1 teaspoons.
• Coriander powder - 1 tablespoons.
• Red chilly powder - 2 tablespoons.
• Golden fried onions - 150 grams.
• Mace - 2 numbers.
• Pepper corn - 6 numbers.
• Lichen (kalpasi) - 1 teaspoons.
• Shahijeera - 1 teaspoons.
• Cardamom - 6 numbers.
• Cloves - 3 numbers.
• Cinnamon sticks - 2 numbers.
• Star anise - 3 numbers.
• Bay leaf - 3 numbers.
• Basmati rice - 500 grams.
• Chicken - 1500 grams.
• Yogurt - 1 cup.
• Coriander chopped - 1 bunch.
• Mint chopped - 1 bunch.
• Green chilly - 5 numbers.
• Oil - 1/2 cup.
• Lime juice - 2 tablespoons.
Method for chicken biryani:
1. Chicken Biryani is a classic one pot meal that can easily be made if you know the right proportion of rice, meat and spices. To make this quick Chicken Biryani recipe, first clean and wash chicken under running water. Pat dry with a kitchen towel and keep aside.
2. Now add all the marination ingredients in it. Rub well with your fingers so that the marination spreads evenly. Ideally you should leave marinated chicken in the refrigerator overnight. If you have sudden guests coming then, use a fork to bore holes in the chicken, marinate and keep aside for 1-2 hours.
3. Meanwhile par boil the rice and keep aside, spread on a plate. If you overcook your rice, it will turn pasty when mixed with the chicken. Dissolve the saffron in ¼ cup milk. Heat some ghee in a pan and fry the cashews and the raisins.
4. Thinly slice the onions and fry them in the same ghee. Reserve half of the onions and keep aside. Remove the chicken from the refrigerator and allow it to come down to room temperature. This step is important for the proper cooking of the chicken. Heat ghee in a deep bottomed vessel. It should have a tight fitting lid.
5. Once the ghee is sufficiently hot, add the whole spices-cinnamon, bay leaf, cardamoms, cumin. Allow them to splutter. Add whole red chillies and the marinated chicken. Add the onions, ginger and garlic paste and cook covered till the chicken is tender.
6. Now add garam masala and roast the chicken till the entire water is absorbed and oil separates from it. Remove the chicken from the pan. In the same pan add a layer of cooked rice, followed by a layer of chicken and then again a layer of rice. Between each layer, sprinkle some dry fruits.
7. The topmost layer should that be of rice. Now add the kesar dissolved milk and cream. Pour this evenly over the rice. Cover the lid and cook on low flame for 10-12 minutes. Remove from fire and garnish with onions, mint, kasoorimethi, coriander and serve hot with raita.
Watch More Exclusive Cinema News, RasiPalan, Trailers, Dubsmash Videos, Movie Reviews, Funny Videos, Celebrities Interviews, Movie Press Meet, Film Audio Launch, Etc..,, on Pakkatv. Subscribe us: https://www.youtube.com/channel/UC5J_IyeNr79wyNCP4TRCt4Q
Like us: https://www.facebook.com/pakkatv/
Follow us:
Twitter:  https://twitter.com/PakkaTv
G+ :https://plus.google.com/u/0/110626327113773224112
Blogger :https://pakkatv.blogspot.in/
Website :http://www.pakka.tv/

How to make Thakkali Poondu...

Do you know Benefits of one...